If a multicast packet is received, and it’s not the multicast RPF interface, it’s dropped. The table can be viewed with “show ip mroute”, and it will clearly show what interface is acceptable. Here’s an example of group 239.0.0.1: 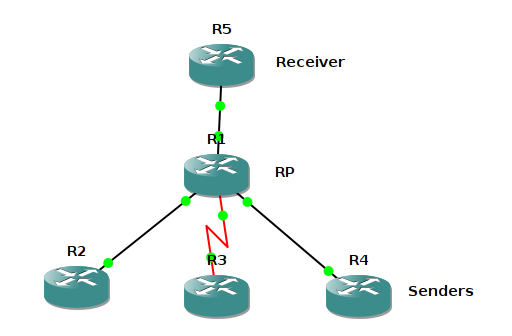 It clearly shows that packets that come from 1.0.0.2 are only accepted when they come in on interface Fa1/1. Packets with any other source address is accepted by the (*,G) route from any interface. In both cases the packets will be sent out Fa1/0.

To just show the RPF path to an IP address while not being multicast-specific, use show ip rpf.

You can’t go low-level as in unicast and do show ip cef < destination address >. In order to see what path a forwarded (or locally originating) multicast packet takes, you have to check show ip mroute. Multicast packets do not show up when doing debug ip packet. The command to use is debug ip mpacket, and even then you must run no ip mroute-cache on interfaces where you want to see packets.

Fourth rule: Only one RP per group

If you use Auto-RP or PIMv2 BSR this won’t be a problem. The protocol should take care to only create one RP per group. When you define your RPs statically (ip pim rp-address < rp-address >), however, you run the risk having two unrelated RPs. You can also get this if you only have one RP address IP, but you announce it from two or more routers in the network (anycast RP). If you have multiple RPs then they will have to talk to each other to make sure they all have a complete list of all senders in the network. Do this by setting up MSDP between them.

Rule 5: The unicast routing table is not to be trusted

show ip route is not used for multicast routing. Sure, the unicast topology is a source of information for the multicast one. But if you’re troubleshooting it just might be (i.e.: probably is) because the process of creating the multicast routing table is not working properly. Your first source of information is and always should be show ip mroute. You also have show ip mroute < group-address > count, which shows counters for each source and a bit of information as to why packets (if any) are being dropped, and how many are forwarded.

Rule 6: For multicast VPNs, lo0 must have PIM turned on

The MDT speaks using the router id. Just make the router id the same for LDP, ISIS/OSPF and BGP and nobody will get hurt. lo0 is the simple choice for router id.

Rule 7: In order for IGMP snooping to work, you have to define the router port

Describing the problem and possible solutions would make this post way too big. So I’ll let Cisco do that.

Short version of one of the solutions: Enable PIM on any router facing a switch, even if you don’t expect to actually talk PIM with any other router on that interface. Also block PIM adjacencies from forming so that they aren’t formed by mistake.

Rule 8: Both sender and receiver side need PIM enabled (or not)

According to Cisco, you need to turn on PIM on an interface in order for the router to listen to IGMP (receiver side) and in order to “perform IP multicast routing” (which I read as something you need on the sender side). My testing shows that sometimes you don’t need PIM on the sender side though. But maybe you should enable it just in case. It probably should be turned on anyway due to rule 7.

But just as with rule 7, make sure that you don’t accidentally set up a PIM adjacency with anyone unexpectedly (this can cause your multicast to fail, even if the other router isn’t misconfigured). If you aren’t using PIM to define the router port (rule 7) you can use ip pim passive. Otherwise you should use ip pim neighbor-filter.

I have no idea why this isn’t default, but you have to wave your magic wand inside your IGP section. mpls traffic-eng multicast-intact. Otherwise you won’t have “interoperability between PIM and MPLS-TE”. What that means is that your RPF will be toast and traffic will be dropped.

Don’t turn on PIM on your TE tunnel. It will not work. The short story is that a TE tunnel is unidirectional, so you won’t be able to set up a PIM adjacency over it. But if you try you will only get your routers hopes up, but hoping for something that will never happen. You can see how hopeless it is with the command show ip rpf < sender-address >.

If this is your first multicast network, you have to play around

show ip mroute, show ip rpf, debug ip mpacket, no ip mroute-cache. Play with them. Learn them. Learn them well. You can know all the unicast you want, but it won’t impress multicast one bit.