If you split up code into different libraries you can get a diamond dependency problem. That is you have two parts of your code that depend on different incompatible versions of the same library. 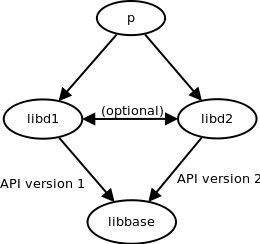 Normally you shouldn’t get in this situation. Only someone who hates their users makes a non backwards compatible change to a library ABI. You don’t hate your users, do you?

I thought I’d dive into this problem as a weekend project. Don’t rely on this article as a source of truth, but please correct me where I’m wrong. I’m not an expert in creating shared libraries, and it’s much harder that it would first appear. The existence of libtool proves that.

Multiple versions of the same library

The lovely land of modern Unix will allow you to have multiple versions of the same library installed at the same time. That’s not the problem. The problem is that when you load the libraries all the symbols are resolved inside the same namespace. There can’t be two versions in use of the same function with the same name, even if they are in different libraries (well, it won’t work the way you want it to). You can’t choose which one to see from different code. (see breadth first search description this article about ld.so GNU linker/loader for details).

In this scenario there are three separate libraries:

And the executable p which links to libd1 and libd2.

What we want to achieve is to have libd1 and libd2 be able to call functions in libbase, but to have them call different versions. Both libbase.so.1 and libbase.so.2 should be loaded and active (have their functions callable).

When you link an executable with -lfoo the linker finds libfoo.so and verifies that it (along with default libraries) contain all the symbols that are currently unresolved. Linking shared objects (DSO, .so files) is similar, except there’s no requirement that all symbols are resolved. If an unresolved symbol exists in more than one library then only one is actually used. You can’t therefore link two overlapping ABIs, even indirectly via an intermediate dependency. Well, you can, but are you comfortable with one of them being “hidden”? (which one is not important for this article)

Both versions of the library can therefore be loaded, but if they overlap then one will hide the other (in the overlap).

How to solve it

The hiding of one of the symbols in a name clash is done by the dynamic linker (ld.so) at load time (run time). Since symbols are referenced by name the only way to differentiate the two names is to force them to have different names.

This can be done in different ways; manually, or automatically. Both append some text to every symbol you want to differentiate.

A small change. Certainly doesn’t appear to refer to a new name. You can also inspect with objdump -T, but the magic happens when you link something to it.

Let’s compile and link one of the libraries that uses libbase.so:

Interesting. The unresolved symbol base_print was changed in the linking step, but d2_print was not. This is because the version info was put into libbase.so (symlinked to libbase.so.1.0). libd2.so didn’t yet exist, so it can’t have version info attached. If you want version info for libd1 and libd2 referencing each other then you’ll first have to create versions of the libraries that don’t depend on each other but do have version info. It’s probably possible to bootstrap this manually, but I haven’t looked into it.

Also note that libd1.so knows that it’s depending on libbase.so.1 (not plain libbase.so). This is the name given with the -soname option when linking libbase.so. So there’s even more magic going on than I led on. And it’s a good reason for having that option.

libd2.so is compiled similarly, except against version 2 of libbase.so. The program p is then linked to both libd1.so and libd2.so, which in turn pulls in both versions of libbase.so:

Note that both base versions are loaded, and that d1() calls d<b>2</b>_print() and vice versa. Diamond problem solved. Yay!

Instead of --default-syms one can use --version-script=base1.map and create the map file.

to create base_print@@BASE1 from base_print_foo. This may still need a map file, but it will override it.

… yet Unix still has much less DLL hell than Windows.

I aimed to provide an accessible view into shared libraries by solving a specific problem. For more in-depth information from people who know more about it than me see the links below. I’ve barely scratched the surface.

The compile time linker (ld) and the dynamic linker (ld.so) do a lot of magic. More than you’d expect if you haven’t thought about it before.